“We need a school, we need an immediate school, which would have folk, native foundations, for otherwise it will give, like everything we have, faded colour with foreign blush “

Kyiv Secondary Specialized Music Boarding School named after M.V. Lysenko (M.V. Lysenko KSSMBS) – one of the leading educational institutions not only in Ukraine but also in the entire Eastern European region in the field of training of high skilled musicians – performers of concert profile. M.V. Lysenko KSSMBS was opened in 1934 at the Kyiv State Conservatory named after P.I. Tchaikovsky (now – the National Music Academy of Ukraine named after P.I. Tchaikovsky), as a professional educational institution for gifted children. In 1944, the school was named after a prominent Ukrainian composer, founder of Ukrainian professional music – M.V. Lysenko. The main purpose of the school is to prepare gifted youth for entering music universities. The undeniable advantage of the school is the combination in the educational process of complexes of subjects of special music education with subjects of secondary general education.

During its existence M.V. Lysenko KSSMB has prepared about 2,500 winners of international and Ukrainian music competitions for all musical instruments of performing specialties, which took place in various countries in Europe, Asia and America.

The best musicians of Kyiv traditionally work at the school. In the first years of the school’s existence in the XXth century, the teaching staff included such well-known masters of music as K. Mikhailov, A. Lufer, A. Yankelevych, I. Slyvak, V. Yablonsky. In the XXIst century, the school has 2 corresponding members of Academy of Arts of Ukraine, 1 laureate of the National Prize of Ukraine named after T.H. Shevchenko, 3 National Artists of Ukraine, 16 Honoured Artists of Ukraine, 4 Honoured Arts Workers of Ukraine, 2 Honoured Cultural Workers of Ukraine, 12 professors, 10 associate professors, 4 doctors of sciences, 3 candidates of sciences. From the 85-year history of the school – more than 35 years it was headed by Valentyn Panasovych Sherstiuk, Honoured Arts Worker of Ukraine, Professor of the National Music Academy of Ukraine named after P.I. Tchaikovsky. Creative activity of V.P. Sherstiuk consisted of professional teaching and a wide range of music and advocacy, methodological and educational, organizational and social work.

The professional achievements of school students are largely explained by ancient traditions and the fact that the most effective form of training of highly qualified professional musicians is implemented there in practice: their education in the system “school-university”, which corresponds to world views on education. The school is proud of its graduates – national and honoured artists of Ukraine, winners of international competitions, famous masters of music.

On every step of school development, General education cycle is an important part of the educational process, the aim of which is to raise future musicians.

Today Kyiv Music Boarding school named after M. V. Lysenko is the center of secondary special music education in Ukraine. It is this school that prepares and publishes pedagogical and scientific-methodical materials about education of performers, orchestra and choral skills, composers and musicians. The most favorable conditions of receiving professional and complete secondary education are created in this school.

M.V. Lysenko KSSMBS is situated in a picturesque Syreckiy park. It is a three-stored building which consists of eighty classrooms, thirty classrooms for individual lessons, a gym and a concert hall.

M.V. Lysenko KSSMBS is also an educational institution where talented pupils from all over Ukraine can study and live.

The boarding school is a four-stored building with an area of 2.5 thousand square meters. There is a medical office in the building.

The goal of the boarding school staff is to create the atmosphere of home comfort. Pupils are taught independence and tolerance. Pupils spend their free time in creative search. They visit concerts, theatres and museums with their tutors.

Having passed more than 85 years of formation and development, it became a center of music education not only in Ukraine but abroad. Young musicians, who study in school, are the future of Ukrainian culture. They are the realization of their parents’ and teachers’ hopes in future. They are the carriers of culture heritage of Ukraine in the XXI century. It is these talented young people who should continue the creative achievements of the coryphaeus of Ukrainian musical art. 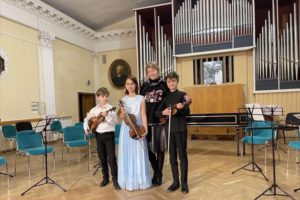